Cindy Lange-Kubick: A simple story of caring, from Larry’s family to Tori’s and beyond 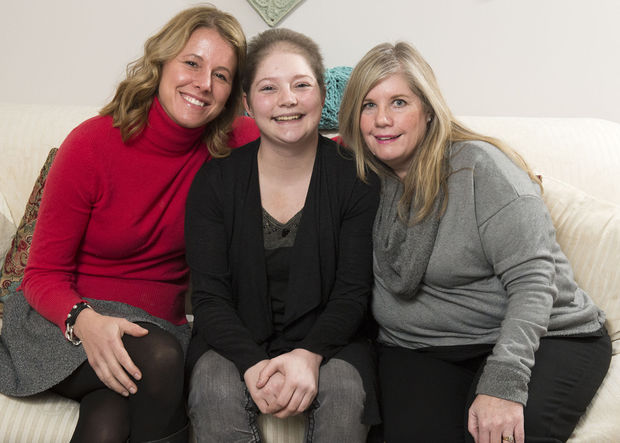 They were strangers until late last summer, when cancer and a dream brought them together.

Their story is simple: Larry’s family cares about Tori’s family.

And Tori’s family cares right back.

The 61-year-old had everything: a beautiful wife and two beautiful daughters and four beautiful grandchildren. A few months before he got sick, he sold the real estate company he’d started in 1999, and he bought a sports car and spent his days playing golf, dreaming up a new business and making plans for a trip to Paris with Brenda to celebrate 40 years together.

Instead, he had surgery and radiation. He lost his strength and then his sight as the tumor began pressing behind his eyes. But he also had a vision.

He shared it with the newspaper in August. He called it the We Care Foundation, a way to help people with devastating diseases like his.

“Help them financially,” Larry said from a hospital bed on the first floor of his home. “Help them spiritually.”

Across town, a mother read those words. She also read what Chris Raun, the director of the foundation administering the fund, said.

“Right now, the story is largely about Larry, but it will soon be about the many people helped by his foundation.”

A few days later, clippings started showing up in Cheri Parent’s mailbox, friends urging her to apply for assistance.

It was hard to ask, but she did. Her daughter Tori wrote a letter, too, explaining why her family needed help.

I am 22 years old and have just found out that I have advanced cancer, incurable ….

They were heading to a cancer center in Houston the day they heard We Care had approved their request, Cheri says four months later.

“It just brought me to tears.”

She and her mom are best friends, and for Christmas, Tori wrote her a two-page letter in tiny print, telling her how much she loves her.

Cheri is chatty, too, a first-grade teacher at Saratoga Elementary School who filled Tori’s Caring Bridge page with detailed updates on her daughter’s condition with headlines like, “We’re going to the Emerald City to see the Wizard.”

That’s what it’s been, Cheri says: a crazy journey down an unfamiliar road, hoping for a rainbow at the end.

Tori is Cheri and Ted Parent’s only child, a tough girl (with a soft heart) who once broke her wrist jumping off a scooter at the end of the driveway and broke her front tooth at day care and cracked her chin and bloodied her lip running to see her dad at work.

But she’d always been healthy.

She played soccer and volleyball and was on the golf team at Lincoln Southeast. And she dreamed of being a firefighter.

She was taking classes at Southeast Community College and working at a nearby hardware store when her symptoms started.

“I had the bladder of a 2-year-old,” Tori explained on the morning of her last round of chemo, her dark hair growing back in tufts like a baby chick. “I had to pee all the time.”

And she was gaining weight, feeling sluggish, Cheri says. But they thought: college, stress, junk food, beers after golf league.

Her OB/GYN even checked her over early in 2015, took blood, did a pap smear, and everything was normal.

But Tori got worse — bloating in her belly, pain radiating around to her back. She tried physical therapy, thinking the symptoms might be related to a car accident in 2012. It didn’t help.

Then in early June, after failed treatment for a urinary tract infection, her family doctor ordered blood work.

He called when the results came back. Come in, he told Tori. And bring your mom.

There were more doctors — “We love our doctors,” Cheri says — and more tests and a visit to MD Anderson Cancer Center in Houston to see an oncologist who specializes in ovarian cancers.

The tumor stretched from her ovaries through her uterus to her colon, and there was evidence of cancer in her lymph nodes and cloudy spots on her lungs.

“We’ve never focused on the stage,” Cheri says. “We’re just doing what we can to get better.”

Her younger sister Andrea Lee lives in Omaha with her husband, Chris, and their two little ones.

Stacia used to sell houses for BancWise, her dad’s company, but she needed a change and started a new career at Union Bank, the same place her dad once worked.

They all do, but they are getting by.

The grief comes when you don’t expect it, she says, like it did on a family getaway over the holidays.

“You’ll think, ‘Dad must be in the bathroom, where is he?’ and it just hits you.”

We Care was important to her dad. He wanted to grow the fund so it would go on long after he was gone.

His family and friends worked to make that happen. They started a Go Fund Me page in April. They put on an art show and fundraiser in August.

And Larry lived long enough to see the first check written to help Tori. A second patient got a check on the day of Larry’s funeral. Two more patients have been approved for help.

Now the family is working on a website to make the application process easier, and they want to stay connected to it.

“I want there to be a face with We Care,” says Stacia. “I felt like there needed to be a connection with us to Tori.”

After Tori’s family was approved, it took Stacia two weeks to get the courage to call Cheri to introduce herself.

They talked for nearly an hour, and Stacia followed up with text messages and emails checking on Tori’s treatment.

“They were just so consumed with all the emotions, like it was with Dad, but it was awesome to talk and get to know them a little bit.”

Brenda gave Tori a card, delivered by a friend because Larry was in hospice and his time was short.

Larry and I wanted you to know how sorry we are that you are undergoing such an illness at your young age. We were glad you found We Care and we are very happy to help in one small way. … Please also know we pray for you every night. …

The Parent family had asked for $4,000 to help pay for expenses not covered by insurance, like plane tickets and cab rides and hotel rooms, while Tori was hospitalized in Houston.

Larry had been treated at MD Anderson, too, and Brenda tucked a gift card in with her note.

It was for the Black Walnut Café, one of their favorite restaurants there, Brenda wrote. The Boston creme pie is Larry’s favorite.

Tori’s mom and dad were reluctant to ask for help. They figured they were good; they’d take out a loan if they needed to.

“Ted and I have saved our whole lives,” Cheri says. “We are extremely prideful.”

They were used to giving, not getting, volunteering at Matt Talbot Kitchen and Mourning Hope and Huskers for the Homeless, at Saratoga and the firefighting program at SCC.

But they learned to let go. Since Tori’s diagnosis, Random Acts of Kindness groups had dropped off envelopes of cash, a group of oncology nurses sent money, friends sold T-shirts, coworkers helped, others hosted a volleyball fundraiser. The list went on and on.

And so, nudged by all those newspaper clippings, Cheri filled out the We Care application.

The money, and the prayers that come with it, mean so much, she says.

“That We Care money allowed me, honestly, to stay with her in surgery and all the time after and not feel rushed.”

They haven’t spent it all.

“Tori plans to pay it forward,” her mom says. “If there’s any money left, she wants to give it back to help another family.”

On a cold January night, Stacia drives to Tori’s house on the east edge of Lincoln.

Cheri gives her a hug inside the front door. Stacia hugs Tori. She hands her a gift card.

“I thought it would be fun to get your nails done before your next doctor’s appointment.”

They stand and chat. Stacia tells them about her 6-year-old twins, a girl and a boy. “They bicker like an old married couple.”

Cheri talks about her own first-graders at Saratoga and about friends who have helped them and a fundraiser Wednesday at Rosie’s Sports Bar.

“We’ll all be there,” Stacia says.

They walk to the family room and Cheri shows off a gift, framed and hanging on the wall, the words to “Somewhere over the Rainbow” stenciled on the glass.

Stacia’s face flushes and she holds back tears. That was her dad’s favorite song, she says.

The song he sang to his grandkids, the song he danced to with Andrea at her wedding.

And then they are in the living room, where Stacia admires Tori’s senior pictures, her hair long and straight down her back. A photo of Tori on a putting green, the golfer in her dad would have loved that, Stacia thought.

They talk about ovarian cancer — the silent killer of women — and about the Black Walnut Café and the gift card from Stacia’s mom.

Tori and her parents will be back in Houston in early February for more scans and a consultation with the oncologist. Afterward, they plan to go to Little Woodrow’s, a neighborhood bar.

Tori has the toast ready: Here’s to you. Here’s to me. Here’s to being in remission and being all the way cancer free …

Stacia nods her head, she gets it, her family prays for it.

Then Larry’s oldest daughter and Tori and her mom crowd close on the couch, posing for a picture.

“Lean in and put your arms around each other,” the photographer says. “Whatever you’re comfortable with … 1, 2, 3.”